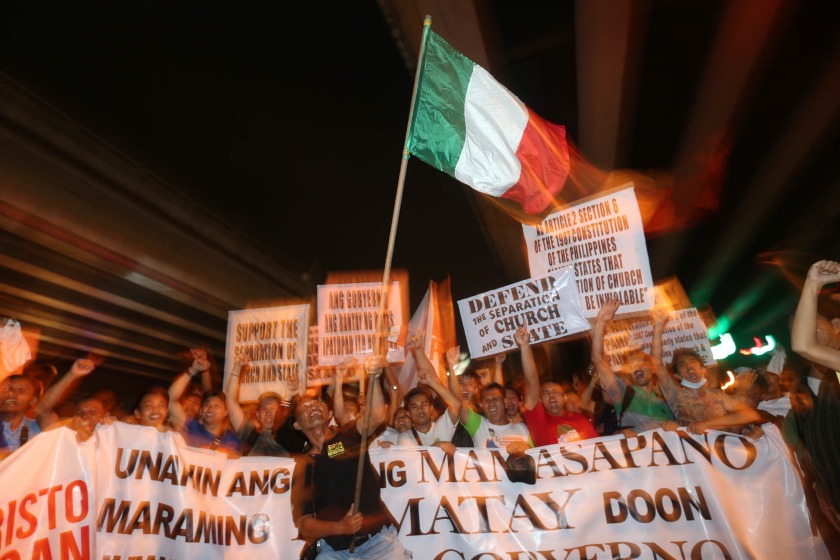 Heeding the call to defend their own church, around 20,000 Iglesia ni Cristo (INC) members have gathered in strategic spots of Metro Manila to disrupt daily routines and send a message to an enraged country: We will defend the separation of church and the state no matter what.

The spotlight shines on Justice Secretary Leila de Lima, whom members claim to be meddling with the church’s[1] internal affairs by ordering an investigation of an illegal detention case filed against certain leaders of the INC.

What does it mean to have thousands of Iglesia ni Cristo members rally against the alleged selective justice of the Philippine government?

The answer is not certain, but the consequences of this sudden mobilization are: The already terrible traffic along EDSA has intensified, forcing vehicles to be stuck in the same spot for hours. Citizens are enraged by the paralysis and the missed opportunities, especially on a payday weekend. Heated words are exchanged in social media, which only furthered hostility on different sides.

Based on the ways that modes of collective behavior are organized and carried out to achieve the goal of change, one can see that the grievances of the INC members make little sense. The investigation of the Department of Justice into the alleged illegal acts of some INC leaders is not meant to transgress the body and foundations of their church. While certain individual acts may be associated with INC as a whole, the legal process of the investigation does not warrant any form of persecution against the religious group itself.

The clamor of INC members for the separation of church and state is therefore misguided. Different legal experts have already expressed how such a misappropriation of constitutional doctrine implies that members seem to be demanding a kind of privilege to be excused from the realm of the law.

As an outsider of the religion, one might ask: Is the protest a matter of independent choice for the members or are they submitting themselves to the mentality of the crowd?

The type of collective behavior we are witnessing reflects the ways by which religion fosters solidarity among its members and how obedience to authority figures affects the capacity of members to be reflexive about their position in the cause they are fighting for.

While any form of social mobilization is disruptive in its own way, the blatant disregard of this spur-of-the-moment protest for public sensibilities, such as blocking a major freeway (without a coordinated alternative) to cause inconvenience to thousands of motorists is one sure way of not gaining sympathy from the larger group, which is important in a social movement. The spontaneity of the collective action goads individual members to give up their regard for appropriate behavior or norms and surrender to the will of the crowd, despite the trouble it will bring to others.

In these unplanned mobilizations, any small act in the group triggers a collective response; the excitement spreads and the event becomes endowed only with emotional substance. While this may not necessarily be bad, when the reason for the protest is in itself questionable, when protesters stubbornly cling to a flawed idea that completely ignores, even disrupts, the common good, when the fight is against the just carrying out of the law over a criminal, NOT a civil, case, then the mobilization becomes nothing more than a move to seek attention. Or to further the interests of the leaders accused.

We can say that this lack of reflexivity among certain INC members – a result of the doctrine of obedience and solidarity (exemplified, for instance, by the group’s system of bloc voting, as yet unchallenged by any member) – could have also been instigated by contextual experiences of oppression, as well as the knowledge that political leaders are vulnerable and can benefit from their group.

But surrendering one’s choice to the mind of the crowd obstructs reflexive thinking even more. Collective behavior driven by this arrangement becomes a senseless act of spontaneity rather than a real social movement, which is more organized and conscious in instigating change. Should there be a better way to handle the grievances of the INC, it would be through the legal processes of which they are a part, and the mindfulness that their collective acts do not manifestly disrupt the lives of people outside their cause.

[1] There are debates on whether the INC constitutes a church, a denomination, or a sect. Sociological definitions would place it as a denomination among the many within the Christian faith in the Philippines, as the Philippines has no official religion. For the purposes of this article, however, we will be using ‘church’ in its popular sense to label the INC.