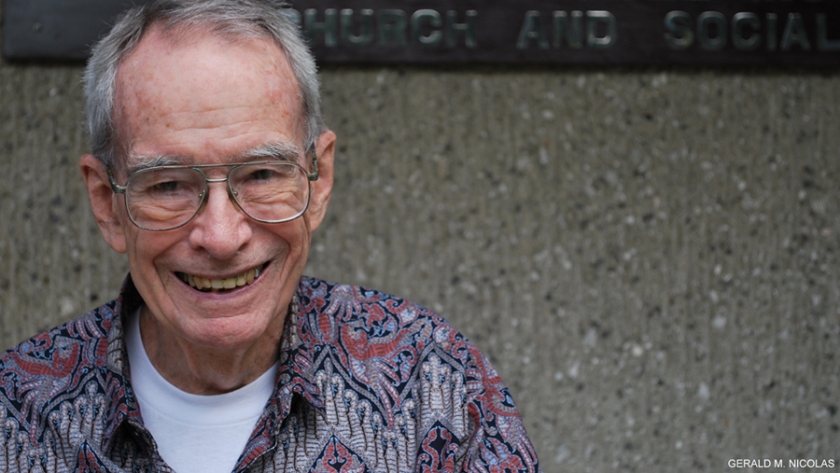 The Department of Sociology and Anthropology, Ateneo de Manila University, deeply mourns the loss of Fr. John J. Carroll, S.J., one of its founders, a long-time pro-fessor, and a pioneer of Sociology in the Philippines. He leaves behind a legacy of writ-ings, projects and organizations that puts social science and the priesthood in the ser-vice of the nation, especially among the country’s poor and marginalized communities. He is among the country’s foremost public intellectuals, a tireless worker for social jus-tice, and a passionate advocate of involving the Church in the forefront of social change. He died on the afternoon of July 17. He was 90 years old.

Fr. Jack was a young Jesuit seminarian when he set foot in the Philippines in 1946. After six years of study and teaching, and becoming more and more aware of social forces that oppress underprivileged Filipinos, he returned to the United States to com-plete his Jesuit studies and to pursue graduate work in sociology, first at Fordham and then at Cornell where he obtained his Ph.D. He came back to the Philippines soon after, rejoined the Ateneo de Manila, and became involved in Philippine sociology as a highly esteemed teacher, mentor, researcher, and activist.

Over the years, Fr. Jack has been President of the Philippine Sociological Society, Acting Director of the Institute of Philippine Culture, Research Director for the National Secretariat for Social Action, Chairman of the Board of Trustees of the Institute of So-cial Order, and for many years, the Founding Director of the Institute on Church and Social Issues. He also served as Professor and Dean of the Faculty of Social Sciences at the Gregorian University in Rome, a Visiting Professor at Cornell University, and member of the Board of Trustees of the Ateneo de Manila University. Alongside these academic and other institutional commitments, Fr. Jack also immersed himself , without fanfare, as a priest and a friend to the poor people of Payatas, many of whom will also be most saddened by his loss. He spoke to them in Filipino and became a naturalized Filipino citizen: he was one of us.

In Engaging Society II, an inspiring book that he wrote, and launched in his ab-sence two days before his death, Fr. Jack wrote an essay, more like a eulogy, about a fellow Jesuit, Fr. Vic Cullen who, like him, was a scholar and an activist, laboring not in the jungle of a city where Fr. Jack found his niche, but in the mountains of Bukidnon, among the indigenous peoples of Impasugong and nearby Kisolon-Sumilao. The last paragraph of that essay, “The Priest Who Wore a Bolo,” written in 2008, said this (italics are in the original):

Vic combined the scholar’s awareness that change takes time with the activist’s conclusion that therefore there is no time to lose. I like to think that, twenty years after his death, the dignity and persistence of the Sumilao farmers in seeking the recovery of their land is just one fruit of the life of this priest who wore a bolo.

Fr. Jack shared Fr. Vic’s scholarly awareness and activist’s conclusion. The two were truly brothers in Christ. And we would like to think that, twenty years after Fr. Jack’s death, best sooner than twenty, the dignity and persistence of the people of Payatas in their will to survive is just one of the many fruits, bushels and bushels of them, freely given in the life of this priest who though confined to a wheelchair, managed to get up and swim, lap after lap, slowly, doggedly but surely, in the school pool. Reaching the goal, the end of the pool, takes time therefore there is no time to lose.